Burger King has redesigned its brand including its logo, packaging, restaurant merchandise, menu boards, uniforms, restaurant signage and decor, and social media, digital, and marketing assets in order to reflect improvements such as eliminating preservatives, the fast-food chain announced on Thursday. “We’ve been doing a lot in terms of food quality and experience,” said Fernando Machado, global chief marketing officer of Restaurant Brands International, which owns Burger King. “We felt that putting a wrap around all that with an upgrade of our visual identity would help signal to our consumers that this is a brand that’s evolving.” 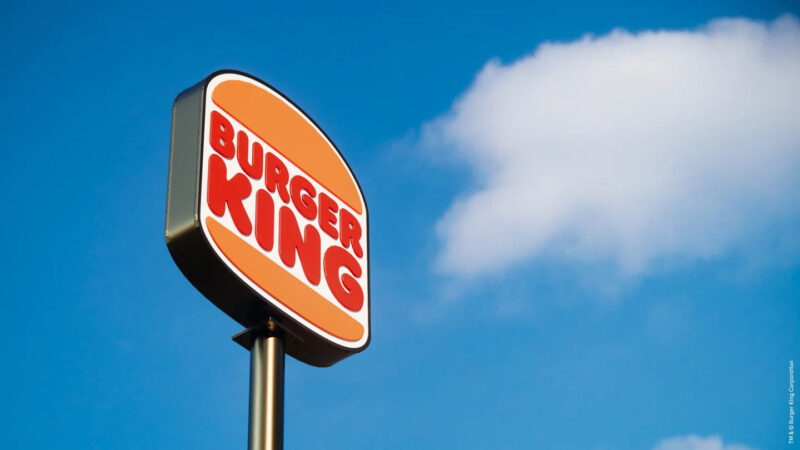 The vibrant new brand identity was designed by the agency Jones Knowles Ritchie. The brand identity, Burger King’s first in over 20 years, has a custom serif typeface and retro colors, like mustard and burnt orange, that mimic the organic shapes and colors of Burger King’s menu items. Additional bold colors in shades of brown, red, and green are a nod to Burger King’s flame grilling process and its use of fresh ingredients, the company said. The result is an expressive, natural look, that feels distinct from competitors.

Burger King earlier this year announced it would remove all artificial colors and preservatives from its signature Whopper burgers as fast-food chains are increasingly introducing healthier options to follow consumer tastes. The brand identity was designed to emphasize fresh ingredients in an industry that’s not exactly considered healthy. “We wanted to use design to close the gap between the negative perceptions people have of fast food and the positive reality of our food story by making the brand feel less synthetic, artificial, and cheap, and more real, crave-able, and tasty,” says Lisa Smith, executive creative director at Jones Knowles Ritchie.

Burger King’s redesign comes at a time when major brands across sectors are flattening and simplifying their look so that it’s functional and legible in digital spaces. That’s part of the reason for this redesign too, according to Smith, who worked with Rapha Abreu, vice president and global head of design at Restaurant Brands International to bring the identity to life. But unlike the many monotone treatments that have resulted so far—Petco, Foursquare, or Lenwich, to name a few—Burger King has kept its personality. This plays out in a few different ways. They moved away from the synthetic-looking 1999 logo, with a circular blue swish around a burger icon. Smith and her team replaced it with an updated riff on the 1969 and 1994 versions that is a toned down, straight on, flat cartoon burger that reads “Burger King” squished between the buns. 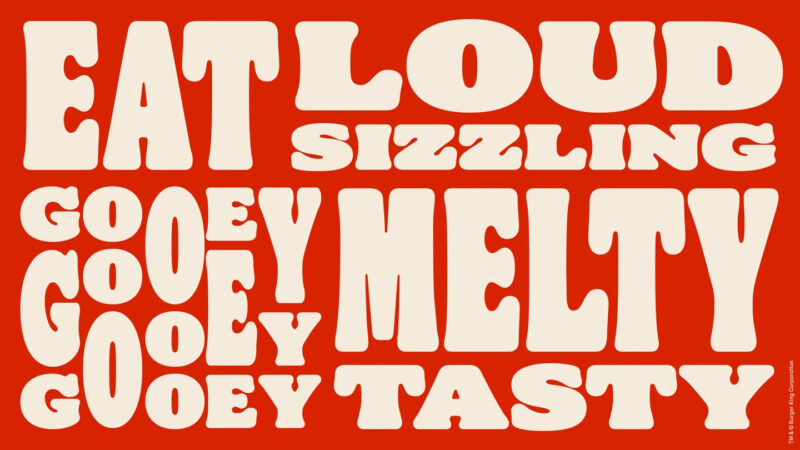 The new look also has a new custom variable typeface aptly called Flame. It’s a groovy and expressive semi-serif that reads like a throwback to the ever-popular ’70s typeface Cooper Black. This might come as a surprise, but to Smith, the type treatment was a natural way for the brand to stand out. “Obviously sans serifs have fallen into what has become a trend of blanding, where there’s nothing distinctive about that brand,” Smith says. “The idea with developing this typeface Flame was that it led us back to creative principles of ‘mouth-watering’ and having the irreverence evoke natural organic shapes of food. It looks a little bit squishy and delicious so you can almost taste the typeface.” 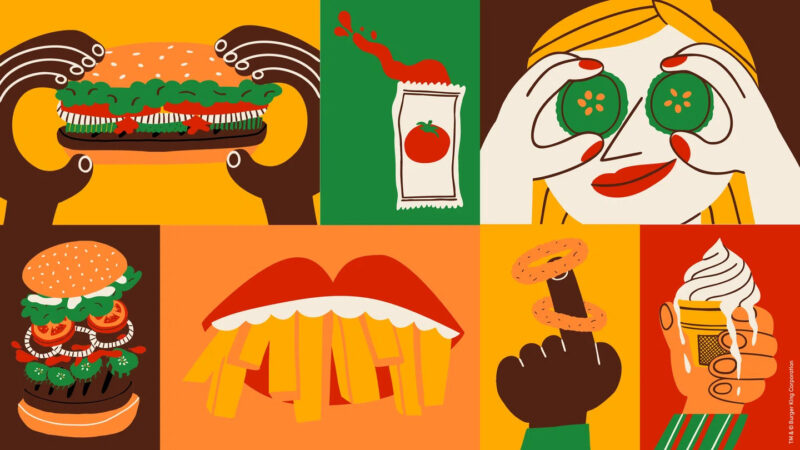 The new design also has playful illustrations by Spanish duo Cachete Jack, which create a new way for Burger King to brand everything from error messages on the website to digital ads and social graphics to the paper that goes on top of your tray when you’re in a Burger King restaurant. They playfully show cartoon people twirling onion rings, eating fries, and using pickle slices as binoculars. The color palette is drawn directly from key Burger King ingredients—beef, lettuce, fries—and looks unabashedly old school.

Smith was executive creative director at Chobani when the company rebranded and introduced homespun, friendly Americana to the yogurt aisle. It was such a fresh concept and in such stark contrast to other yogurt brands, it launched a retro trend we’re still seeing today. There’s a parallel here in foregoing minimalism in favor of expressiveness. “I’ve always loved textures of photography and illustration and having a really rich toolkit that brands can use but that are very recognizable. This could’ve gone so many different ways but this is what was right for this brand.”

The company’s famously quirky plastic-faced mascot – The King – won’t be going anywhere despite the rebranding.

“We love him the way he is, and he will continue to be weird,” Machado said.